Two local agriculture leaders have been elected by the stockholders of Alabama Ag Credit to serve on the board of directors for the financial cooperative. The elected board members, who are stockholders themselves, are responsible for establishing policies, providing strategic direction, and overseeing all major institution functions for the association.

The individuals elected were:

Mark Platt resides in Fruitdale, Alabama, and has been farming full-time for 20 years. He is co-owner of Platt Farms, a Washington County-based operation that includes principal commodities produced are poultry, cotton, peanuts, feed grains, cattle, and timber.

Richard Meadows resides in Columbia, AL, and has been involved in the farming business for most of his life. Mr. Meadows is an Area Sales Manager for WB Fleming Mineral Company as well as a partner in Meadows Creek Farm, a cattle operation partnership formed in 1985 based in Houston County. He also raises commercial cattle and market feeder calves. In addition, the farm also grows corn silage, grain sorghum, and small grains for cattle feed. 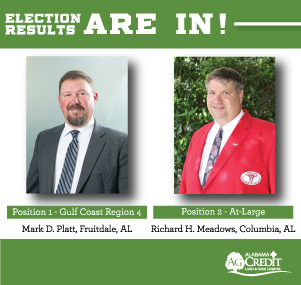