Imagine a 19-year-old from Honduras, fresh out of five years of military service, weighed down with the sadness of having lost a family member to drugs and longing for something more. For J.R. Rivas, this was reality.

So in 1989 he struck out for the land of opportunity — the United States of America — with a suitcase of hopes, a backpack of dreams and barely a penny to his name.

Nearly 30 years later, Rivas tells his story from the den of his brand-new lodge, named Shack 33, which overlooks more than 1,200 acres of world-class hunting and fishing land.

As Rivas speaks about the hard work it took to overcome life’s obstacles, he expresses gratitude for the folks who helped him achieve his aspirations.

“Along the line there have always been people who are not necessarily family, just people I came in contact with who saw the eagerness I had to progress and to continue to fight for a better future,” Rivas says before getting too far into his story. “It’s those people I am so grateful for. They gave me opportunity.”

A Nickel a Ball

It’s been a long road since Rivas earned his first paycheck in the U.S. — $85 for retrieving 1,700 golf balls at a nickel apiece in Marrero, La. After paying $50 for rent and $25 for transportation, he was left with only $10 to feed himself.

Longing for a better life, eventually Rivas packed his backpack and headed east to Mississippi, where he met an “interesting guy.” He describes Police Chief Ray Murphy as a mentor who opened many doors.

Remembering his roots and the pain of loss, Rivas was passionate about law enforcement, especially when related to narcotics. Thanks to Murphy, he worked undercover for 10 months building cases with the Immigration and Naturalization Service for the U.S. Customs Service. He even turned down $12,000 in payment because he had a greater vision in mind.

“They asked what I wanted for my service, and I said United States citizenship,” Rivas says simply. “I wanted a career in law enforcement, but I couldn’t pursue that without citizenship.”

And that’s exactly what he got. Shortly thereafter, he was sworn in as an American citizen and on his way to a career in law enforcement.

That dream quickly took him to Washington, D.C., where he worked for the Metropolitan Police Department. But Rivas felt a call to head back south, and landed in Laurel, Miss., where he signed with the Mississippi Bureau of Narcotics as an undercover agent.

How to Make Ends Meet

Rivas was still working in law enforcement when he settled in Alabama and confronted another obstacle.

“I wasn’t making ends meet,” he says. Yet with that same determined spirit that brought him to the U.S., earned him citizenship and gained him a career in law enforcement, Rivas made plans to overcome.

“That’s why I started my business — just to provide the money I needed to cover my expenses,” he said. “There was a point in my life when I couldn’t make the mortgage payment, buy groceries and pay the utility bills at the same time.”

He started the lawn care service Personal Touch as a sideline, and after 10 months realized he was making more money in lawn care than law enforcement. He decided to fully engage in Personal Touch and focus on making his business grow.

As his customer base grew, so did the demand for new types of work, and he expanded from landscaping and lawn care into tree trimming and planting. Recognizing the opportunity for more commercial work, Rivas sold the lawn-care portion of his business and invested in equipment that would allow him to apply herbicide and clear brush for energy companies such as Alabama Power, Georgia Power, Progress Energy, Duke Energy and Gulf Power.

Initially he worked as a subcontractor, but it wasn’t long before one energy company noticed his hard work and asked him to become a general contractor. Despite the opportunity for profit and advancement, Rivas felt committed to a gentleman’s agreement he had already made, and waited a year and a half before accepting a new contract.

“I wanted to keep my word to another company, and so I did,” he explains simply.

Once he had honored his agreement, Rivas earned his general contractor’s license and became a sole contractor under Alabama Power for herbicide application. From there he took on even bigger projects, such as mechanical tree trimming to remove branches that were encroaching on rights-of-way.

As his business grew, so did the need to entertain clients. Rivas recalls spending 44 to 52 days a year taking customers on excursions, almost all of which were outdoors. Recognizing that he wouldn’t have to travel so often if he brought the clients to him, he purchased his hunting paradise in Marengo County in 2012. The next year, he built his first lodge at Soggy Bottom. 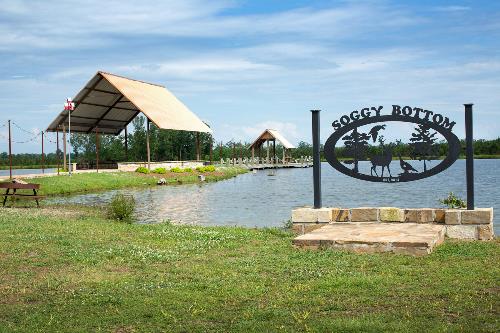 With the help of Alabama Ag Credit, Rivas purchased additional acreage in 2015 and built a second lodge in early 2017. He had initially intended to put a shooting house atop the sloping terrain, but when the land was cleared, revealing breathtaking views, he decided this would be the home of Shack 33.

Guests of Soggy Bottom can spend their days hunting quail, chukar, pheasant, duck and other wildlife, or fishing in a 20-acre lake fully stocked with F1 bass and brim. Starting this year, the property will offer fishing on a fully stocked 24-acre lake, too. And if fowl and fish aren’t for you, the property also boasts white-tailed deer hunts with bucks ranging from class 150 to class 385.

Holding Firmly to His Passions

Despite the demands of his growing business and property, Rivas hasn’t forgotten his first calling and passions.

Four years ago, he was sponsored by Clarke County Sheriff Ray Norris to attend the police academy, where he received his Peace Officer Standards and Training (POST) certification. Presently he specializes in drug interdiction at the 17th Judicial Circuit Drug Task Force, which obstructs drug cartels in the U.S. by intercepting major loads of narcotics and other contraband.

Partnering with people and organizations that give back is of utmost importance to Rivas too. In fact, shortly after he’d visited with Alabama Ag Credit Demopolis branch manager Jason Abrams about the possibility of expanding his property, Rivas asked Abrams if he was interested in partnering on a project called Kidz Outdoors, which provides opportunities for children with special needs to hunt, fish and spend time outside. 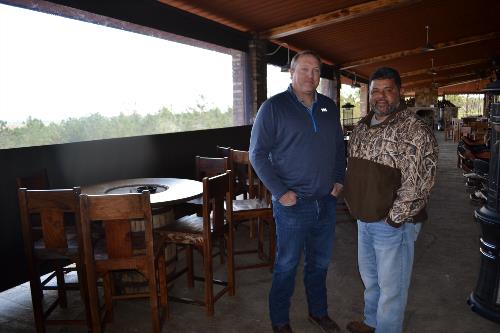 “What captured me about Jason was that when I asked him about the project, he didn’t hesitate to help,” Rivas says. “And he’s already committed to this year’s [Kidz Outdoors] event.”

If anyone understands the difference it can make to reach out and give someone a hand, it’s Rivas.

“I like to partner with people who are aren’t afraid to work hard and who are willing to give back to the community,” he says. “I know that I’ve been helped before in many ways, and if I leave any legacy behind, it’s to be remembered as a person who came from a third-world country, was given an opportunity and is now giving back.”